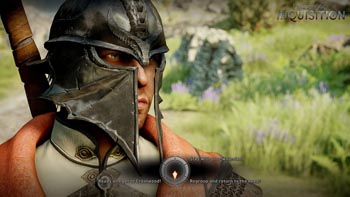 Romance is back again in Dragon Age: Inquisition, and BioWare hopes to frame intimate scenes in a way that focuses more on an emotional connection.

From Dragon Age to Mass Effect, BioWare often makes games that feature romantic encounters with other characters. The way these scenes are composed can alter the mood or feeling the developer intended. Cinematic Director Jonathan Perry, who worked on both series, said he hopes to treat intimate scenes in a more mature and more tasteful way in Dragon Age: Inquisition.

"Something that didn't work well is that we tried more, well, I won't say graphic, but in Dragon Age: Origins we had characters crawling around in their underwear," Perry said in an interview with GamerZines, "and it looked weird because they were wearing these lacy Victoria Secret panties and outfits which looked out of place."

Perry referenced scenes in Mass Effect where characters were nude and framed in ways that placed parts of bodies in shadow. He added that the focus for the scenes will not be sex itself. "This is the culmination of spending a lot of time with a character and getting to know them, and so we're giving scenes a mature and tasteful treatment," Perry said.

Another feature of these BioWare games is the impact of your decisions as a player on other characters who each have their own drive, passion, and distaste. During a scene in Inquisition, if one of your actions upsets someone, the camera will react accordingly in a jarring manner.

"We might experience the same lines, but the framing of the characters in the shot might be completely different based on what we're doing," Perry said. "Previously when a character said a line, they would always have the same emotion, but now... they could say the same line but have a stern look or a happy look based on how the conversation is going or what has come before that."

Perry believes there is an "uncanny valley" between film and games in regard to difference in love scenes, "but games can be powerful in a very different way because they...can react to what you're doing and that's something you don't get in film as you are a passive viewer."