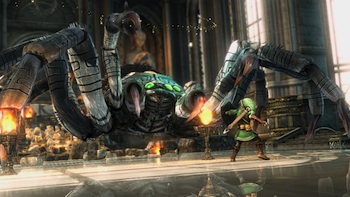 Because it's never to early to start talking about E3, right?

Nintendo may have broken a record here, folks. It's been less than five months since we put E3 2013 behind us and a developer is already teasing a game for next year's show. So who's the culprit? Nintendo producer Eiji Aonuma. The game in question? The new Zelda game for the Wii U.

Speaking with Mashable about Wind Waker HD and A Link Between Worlds, Aonuma was casually asked if there was anything to say about a new Zelda game for Wii U. His reply was oddly specific:

Though Aonuma has already confirmed there's a new Zelda in the works, information on the game is scarce. The producer recently told Japanese outlet 4Gamer that development on the all-new Zelda is "going well." Aonuma also mentioned the game will use the Wii U gamepad in "various ways."

With E3 more than 6 months away, Aonuma's statement doesn't can't really be considered an announcement. There's no way of knowing what he and his team will be ready to talk about next June. Even if the current plan is to show the game publicly at E3 - which is not what he suggested - development could be delayed for any number of reasons.

Obviously there's a lot of speculation here. You can only squeeze so much out of a single sentence. If we Aonuma at his word, expect to hear more about a new Legend of Zelda for the Wii U next year.