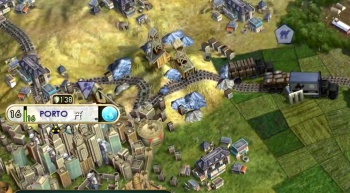 One pack's out now, the other's due soon.

Civilization V: A Brave New World introduced a fun new scenario for the Livingstones among you: Scramble For Africa, which let you explore, exploit and build railroads through the African continent. The continent is dynamically generated, creating a whole new Africa each time you play. Two new map packs are on their way, taking advantage of this cunning idea: Scrambled Continents, and Scrambled Nations.

The idea behind each is simple. Take a real world continent, or a nation, and recreate it; but with all the resources, natural wonders and other goodies randomly generated, so you don't always have the same game with the same tactics. Africa, Asia, North and South America, Western Europe, the Middle East, a thawed Antarctica, plus one map including all of Earth's continents, and other fun stuff, will be available in Continents. Or for the Nations crowd, there's Canada, Australia, Japan, Scandinavia, Great Britain and China to go crazy in.

Scrambled Continents is out now, while Scrambled Nations is due November 5th. Both cost $5.