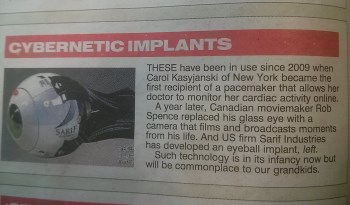 Sarif Industries, the fictional firm at the center of Deus Ex: Human Revolution, has been cited by The Sun as one of the leading innovators in the field of cybernetic implant technology.

Notorious U.K. tabloid The Sun may not be the most journalistically rigorous publication on the planet, but even though occasional missteps are nothing new for the paper I can't help but have a little fun with this one. A recent article in the print edition of the tabloid took a quick look at a number of emerging technologies, including cybernetic implants, but things got a bit out of hand when the author whipped up a brief history of the industry's high points.

"These have been in use since 2009 when Carol Kasyjanski of New York became the first recipient of a pacemaker that allows her doctor to monitor her cardiac activity online," the article states. "A year later, Canadian moviemaker Rob Spence replaced his glass eye with a camera that films and broadcasts moments from his life. And U.S. firm Sarif Industries has developed an eyeball implant."

The article includes a picture of a "cybernetic eyeball," complete with Sarif Industries logo, which looks very cool - and, of course, does not exist beyond the confines of a videogame. I'm not sure how much that will actually bother anyone at The Sun, but it's good for a laugh. And you have to admit, the Sarif Industries website is pretty convincing - at least until the Lazarus pirate broadcast kicks in.