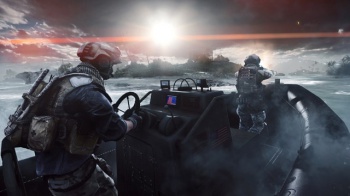 DICE producer Patrick Bach says the beta build is "well out of date" and that testers "aren't playing the actual game".

The Battlefield 4 beta, while fun, has been criticized for being pretty laden with bugs, and balance flaws, especially considering that the game will launch later this month. However, DICE producer Patrick Bach says that as well as these critiques being "objectively wrong," testers are also playing a long-outdated version of the game. What was the point of the beta then? Stress testing the game, says Bach, "so that you don't end up in a Rockstar situation where the game doesn't actually work on day one."

"And it's actually quite scary to see how objectively wrong people can be. Because they want to win, personally, therefore they claim the thing that prevents them from winning is a design flaw or a bug or something."

Bach said that in the past, when DICE was not as experienced as it was today, it would design patches and updates based on internet rage, which made its games worse because player perception is inaccurate. "It's in our interest to keep the game balanced and stable and find the right things to tweak to keep things on top. If people are only using one gun in the game, the game is probably broken," he said.

"I saw people saying 'oh, you haven't fixed the problems you had in 3 because there are too many snipers,' and it's like no, we can see on the data that you are objectively wrong about this thing."

As for the bugs and glitches, "we're trying to compare our list of feedback and bugs with the list we're getting from the community," says Bach. "While we know that what people are playing isn't the latest game, it's one or two months old, we're comparing notes on what is already fixed."

So what do you think? Does this ease your concerns about the game? Were you unimpressed by the beta?