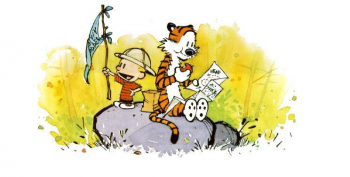 Bill Watterson knows the world is changing, and finds it a little unsettling, but time moves on.

It's a rare month for Calvin and Hobbes fans; first comes news of a documentary, and now Bill Watterson - notoriously publicity-shy - speaks up at Mental Floss. But this doesn't mean Calvin's coming back, before you get your hopes up; Watterson's moved on. "Repetition is the death of magic," says he, and that means no movies either. The strip works as intended, and Watterson sees no benefit in adapting it to another medium.

But what about the future of comics? Here's a man who made pen and ink come alive; what does he think about the digital medium? Watterson's sanguine, but not for the reasons you might think. Comics have never been more respected, as a medium, but the mass media is disintegrating, and that means audience fragmentation. "I'm old enough to find all this unsettling," says he, "but the world moves on."

He knows that technology can achieve great things; form follows function, and you can do almost anything with words and pictures. The issue, he feels, is less with the medium than with the people who read them. Comics remain relevant but, so long as each strip talks only to a smaller and smaller segment of the audience, the end result won't have the same impact as before. "They definitely won't be the same as what I grew up with," says Watterson.

Though Watterson's spent a lot of time painting since the end of Calvin and Hobbes, don't expect to see a Watterson exhibit any time soon. "Calvin and Hobbes created a level of attention and expectation that I don't know how to process," says Watterson. But if you have a bootleg Calvin sticker on your car, you needn't worry that Watterson disapproves. Long after the strip's forgotten, those decals might be his ticket to immortality, he thinks; but, to my mind, you'd be waiting a very long time for Calvin and Hobbes to fade from cultural memory.