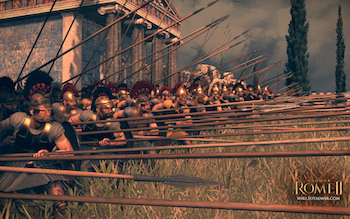 They say that Rome wasn't built in a day, and the same holds with Total War: Rome 2. While it launched last month, developer Creative Assembly still isn't done giving touch-ups to the strategy title. The developers announced that a new update will add a whole new faction and official mod support, by way of Steam Workshop.

Joining the throngs of other ancient civilizations are the Seleucids. Formed out of the dissolution of Alexander the Great's empire, The Seleucid's are described as possessing "expert cavalry" with "a solid core of excellent spear and pike infantry". The official wiki offers more information, though most of it is historical and not gameplay related.

Even if the Seleucids aren't your style, you're sure to find something with the new Steam Workshop support, which will allow players to quickly download any of the creative mods that the community can program. The Workshop support has been in beta for a while now, so it's already seeded with various modifications to better tailor the historical battles to your personal tastes.

The update comes along with Patch 5, which adds well-needed tinkering to the game's innerworkings. It does everything from use less video memory to improve the AI's decision-making ability. All of the fixes await your perusal here.