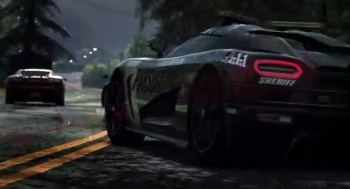 Creative Director Craig Sullivan knows a developer has to focus its efforts.

Need For Speed: Most Wanted went to the Wii U with several system-specific features, including Co-Driver mode, but Need For Speed: Rivals isn't going anywhere near Nintendo's next generation console. "It's not the kind of stuff that I like talking about in detail, that much," says Criterion Games' Craig Sullivan. "We did a load of extra work on the Wii U version, and we had a lot of guys working on that stuff, you know?" But sales didn't justify the effort, and so Rivals won't be a Wii U title.

"You have to work out where you focus your efforts," says Sullivan. "The 200 people working on this game are only capable of making so much, and doing so many different versions of the game, so we had to go with where we think the biggest audience will be for the game." Need For Speed is published by Electronic Arts, which back in June said it would only develop more titles for the Wii U if the platform's sales improved. Other companies have signalled their lack of enthusiasm, and it all comes down to sales: the Wii U has yet to really capture an audience, and without it, developers aren't interested in Nintendo's console.

Things are changing. Nintendo wants the Wii U to be more indie friendly, dropped its Deluxe price, and enjoyed a decent - if not spectacular - E3. But it's not soon enough for Need For Speed; Nintendo had better hope things improve at Christmas, else Michael Pachter's snark about Nintendo losing its mojo will start to look prophetic.