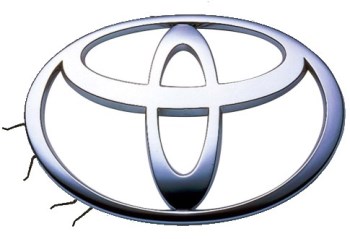 Toyota has recalled 870,000 cars because of the wicked machinations of death-dealing arachnid monstrosities.

Spiders, spiders, everywhere. They're creepy, and they're deadly, and they're out to get you - don't turn your back! Especially if you drive a Toyota, specifically a Camry, Venza or Avalon from 2012 or 2013.

These vehicles, as it turns out, have an exposed, unprotected drainage tube leading down from the air conditioner condenser, into which spiders can crawl and, as they sometimes do, spin webs. Those webs create a blockage; the blockage forces water to drip onto an airbag control module, shorting it out; and that short-circuit can cause the airbag warning light to kick on or, in worst-case scenarios, the airbag to actually deploy. If you've ever seen video of an airbag going off, you know that is definitely not something you want to happen, especially when you're doing a buck-twenty down the highway.

Toyota says that there have been 35 reports of warning lights coming on and three airbag deployments as a result of the issue, and the only consistent cause of the blockage it's been able to find has been spider webs. The car maker is sending out notices to owners and will fix the problem at no charge, but, perhaps wisely, it's not going to try to keep the spiders out; instead, it will just keep the water from dripping onto the module.