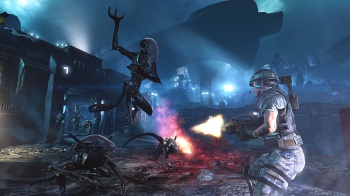 The word on the street is that Alien: Isolation, rumored to be the next game in the Alien franchise, will be set on a single space station and focus on Ellen Ripley's daughter Amanda.

We learned earlier today that Twentieth Century Fox has trademarked Alien: Isolation as a new videogame title (and decorative magnets), something of a surprise given the recent disaster of Aliens: Colonial Marines, currently rocking a 45 aggregate score on Metacritic. But Kotaku says that according to its source, the game is in fact happening, and that it will be a little different than Alien shooters that have preceded it.

Alien: Isolation will star Amanda Ripley, daughter of Ellen, who was a child when her mother disappeared after the incident aboard the Nostromo and died three years before she was found. Most or all of the game will be spent aboard a space station, and there will be only one xenomorph for most of it; clones and soldiers will comprise the bulk of the game's enemies. Stealth and horror will both feature prominently in Isolation, which the source said will be "heavily inspired" by the original Alien.

Perhaps most importantly, even though it probably goes without saying, Sega has looked very closely at the failure of Aliens: Colonial Marines to figure out what went wrong, and is determined to do better with Alien: Isolation.

It's all just rumor at this point and Kotaku noted that some of the information is six months old, which is more than enough time for things to change, but if Sega is serious about restoring respectability to the franchise it needs to either wait ten years for the Colonial Marines business to blow over, or do something genuinely and dramatically different. An Alien game that's more like Alien than Aliens? That might just do it - if it's done right.

Life - It Comes at You Fast Marter 7 Comments
Comments on