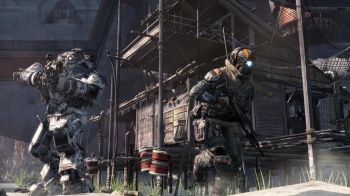 Titanfall's producer hopes the game will be the next big thing gamers have been waiting for.

Titanfall Producer Drew McCoy thinks that Titanfall can possibly be the next "big thing" that will completely shake up the game industry, and he is beginning to feel the pressure. "We think about it all the time," he told MMGN, "It's like, oh man, we can't screw this up. Especially when we came out of E3 with that sort of great response. We came out of there really excited, but also realizing, 'Oh man, we can't drop the ball on this'. This has to be perfect."

"I think the last few years, games have stagnated a lot," he continued. "People are holding back their new, big ideas. Gamers feel that. They know that. They're waiting. All they want is that next awesome thing to grab on to. What better time than now?" McCoy believes that Titanfall can fill this role, and from what I've seen (and played) of the game so far, I believe him.

In the full interview, McCoy also talked about the "story-driven" multiplayer of the game, admitting that "We don't want the thing where it's the tenth time you've played a piece of the story, because you've played every night for a month." He says that players will be able to opt-in with their friends to a Team Deathmatch mode with no story elements at all.

McCoy also tries his best to explain the mythical "Cloud" that Microsoft keeps telling us will make gaming better. "basically what it boils down is, Microsoft has data centers all of the world, with tonnes of servers in them, just sitting in a giant pool of resources that we can say, 'Hey, you're in Germany and you want to play? Here's a German server for you'. It dynamically allocates German servers for you based on where you're playing from." He says it will ultimately make the whole experience better.