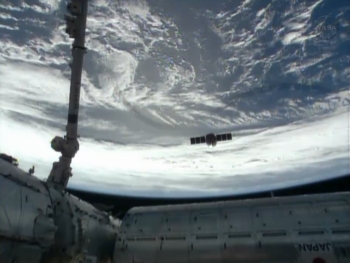 Government run cargo resupply missions to the ISS are becoming much less frequent. NASA famously decommissioned the Space Shuttle in 2011 and the ESA announced it would end its use of the Automated Transfer Vehicle after its final flight in 2014. Only the governments of Russia and Japan will continue to operate resupply missions. NASA has since turned to the private sector to take over its duty of keeping the ISS supplied. Earlier this morning, the first freighter to arrive from Orbital Sciences was released, completing the craft's demonstration flight to the ISS.

Cygnus blasted off just over a month ago and performed a series of maneuvering demonstrations and rotation capabilities inside the "keep out" sphere of the ISS. This bubble, with a radius of 200m, is a strict no fly zone for any craft without clearance from NASA. The ability of Cygnus to perform safely inside this sphere is essential to any future missions. After successfully completing 10 milestones set out by NASA, the craft was captured by the Canadarm2 robotic arm and pulled in to dock on September 28th. The 1300lbs of fresh supplies carried by Cygnus were swapped for 2850lbs of waste over the course of its stay. The hatch was closed on Monday night ready for the craft to depart this morning.

The freighter undocked before being moved into position by Canadarm2 and separated at 6:31 CDT over the Atlantic Ocean, just east of Argentina. Cygnus fired its thrusters to move a safe distance away from the station before executing its final two deorbit burns tomorrow. The craft will fully disintegrate on reentry in the upper atmosphere. NASA now starts its review of the flight and in the coming weeks it is expected to give the green light for future resupply missions from Orbital Sciences, along with a payment of $1.9bn.

Cygnus joins the Dragon Capsule as the second privately funded spacecraft to resupply the ISS. Although SpaceX has already sent 3 Dragon Capsules into orbit, Orbital Sciences is hot on their heels. Cygnus 2 is already loaded with supplies and set for launch on the 8th of December. Hopefully there's still room for some last-minute Christmas presents!