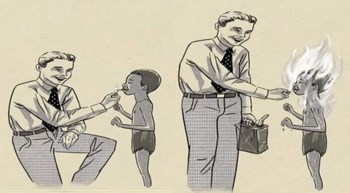 The creator of The Stanley Parable says an in-game image that players have found offensive will be changed.

Deep within the bowels of The Stanley Parable exists an in-game instructional video entitled "Choice." You can watch it yourself on YouTube, starting at around the 3:30 mark, but the short version is that it talks about the power of choice and how it can be used for both good or ill, using as an example a "hypothetical real person named Steven," rendered in pencil-style as a very white guy in a shirt and tie.

"He could spend years helping improve the quality of life for citizens of impoverished third-world nations," the narrator states overtop an image of Steven lighting a cigarette for a small, smiling, dark-skinned boy. "Or he could systematically set fire to every orphan living in a 30-kilometer radius of his house."

That second statement is accompanied by an image of Steven holding a gas can in one hand while he sets the same boy, who seems to still be smiling, on fire. That didn't go over well with player Oliver Campbell, not because a child was being immolated, but because he felt it was racist. He contacted Stanley Parable creator Davey Wreden with his concerns, and Wreden agreed to update the sequence.

Wreden told Polygon that he received two complaints from people who claimed the images made them "significantly uncomfortable," which he said caught him off-guard because he thought they were "too cartoony to identify as problematic." Nonetheless, he thinks the segment can be changed without too much trouble and added, "If a person would feel less comfortable showing the game to their children then I've got no problem helping fix that!"

"It took a bit of explanation, but [Wreden] did understand the nature of my complaint, and I offered ways of fixing this without destroying the joke or a prohibitively expensive additional amount of work," Campbell said in a separate email. "He explained that he didn't quite understand, but was more than willing to listen, and that it's very hard for a creative to figure out which player requests to pay attention to."

Wreden said he hopes to have the sequence changed "in the coming weeks."