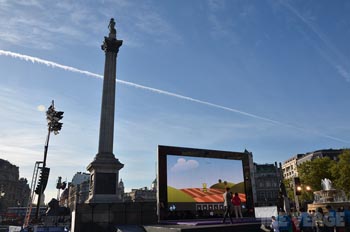 Microsoft markets itself to London with a big, interactive screen in Trafalgar Square.

Against the background of a cloudy London sky, one 383-inch tablet sits in the middle of one of London's big tourist areas. Microsoft built a large Surface tablet for people to interact with in Trafalgar Square next to Nelson's Column.

Microsoft recently released its Surface 2. The giant Surface in the tourism-heavy Trafalgar Square has already caught the attention of many people of various ages either living in London or visiting. The tablet includes a large Surface keyboard for people to use by stepping on the keys. Children can play a spelling game by jumping on the right keys. The keyboard is large enough that there is space to walk around the keys without stepping on one. The tablet is connected via USB and Micro HDMI, and it's powered by a Surface 2. It's all fully functional and designed to stir up interested for the new Surface 2 tablet.

Microsoft built the large Surface in 12 hours. It is 27 feet wide and 17 feet high, making it larger than some of the surrounding statues and fountains in the area, but it's still nowhere near the size of the 170-foot tall Nelson's Column.

Trafalgar Square sees thousands of people pass through, making it an ideal location for publicity. To the north of the square is the National Gallery. Many London Underground stations surround the area, as well as many busy roads, making it an area high in traffic.