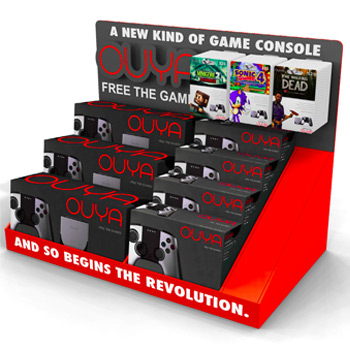 Starting this month, the Ouya will be available at Target stores across the country.

Last June, the Ouya started appearing at a few selected retail outlets, but until now, not a single nationwide chain has agreed to carry the little console in all of its stores. However, today in an interview with Polygon, Ouya founder Julie Uhrman revealed that Target has agreed to stock the Android-based microconsole at each of its 1,800 locations.

"What is the most exciting is how we've been embraced by retail," Uhrman said. "When we launched in June we were live in the U.S., Canada and the U.K. We launched with GameStop, Target, Best Buy and GAME. This month we are going full chain with Target."

The Ouya, and its newly redesigned packaging, will start to show up on Target shelves by the end of the month. The team is also putting together a swanky new kiosk, which will allow potential buyers to take the console for a spin. Those will be rolled out early next year.

During the interview, Uhrman was upfront about the Ouya's rocky history, but she remains optimistic about the future. "There were some absolutely unacceptable things that we just didn't, we didn't see regardless of the amount of testing we'd done," she said. "For a company that is less than 35 people that went from an idea to a full product in less than nine months and four months after launch is nearing 500 games with 25,000 developers, I think our successes far outweigh our misses. And yet that's what people want to talk about, but that's also what we want to focus on because that's what makes us better as we listen, iterate and use it to make the product better."