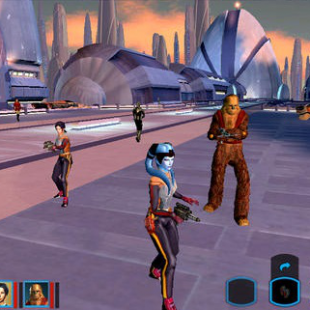 Star Wars fans can now download Knights of the Old Republic from the App Store for a mere $4.99.

There are many who rank Knights of the Old Republic as their favorite RPG and perhaps even more who would count it as the best Star Wars game ever made. That in mind, there were more than a few who were excited when it was confirmed that beloved game was going to be transformed into a mobile experience via a port to iOS. Fans were further delighted when the mobile version of the game actually wound up doing a decent job of translating the console/PC controls of the original game to the touch interface of the iPad.

As if it wasn't already a steal at $10, the game has just recently received a new price cut dropping that price down to a mere $4.99. It's as if the Force itself is willing gamers to pick up their iPad 2 (anything older won't be compatible) and buy the game. Honestly, if that's the case, we'd have to agree with the Force on this one. Knights of the Old Republic didn't earn its reputation for quality by sheer luck, it's a genuinely great game that still holds up really well today, especially since the iOS version gives it a spiffy HD facelift. In other words, if you haven't tried it yet you should.