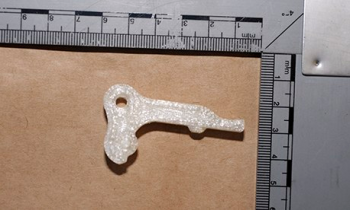 In what may be a world first, Greater Manchester police have seized what is believed to be components for a 3D printed firearm, in a raid on organized crime targets as part of operation Challenger. The parts include what may be a magazine and trigger, as well as the 3D printer used to make them. Firearms specialists are now forensically examining the units, to determine whether or not the parts could be used to make a viable weapon. A man has been arrested on suspicion of making gunpowder and is being questioned.

But the seizure may not be what it seems. It has been alleged that the parts taken in the raid are actually spare parts for the 3D printer. "We are aware of this suggestion, and it would be easier if it was cut and dried as to what these items are," said a police spokesman. "But when you take it as a whole, including the discovery of gunpowder, it is disturbing."

The Challenger raids are Greater Manchester's response to the murders of PCs Fiona Bone and Nichola Hughes, in September 2012. The unarmed constables were lured to a house by a fake burglary report, and then shot dead by Dale Cregan. Cregan fired over thirty rounds, hitting each officer multiple times, and then threw a fragmentation grenade at the constables' bodies. Cregan was involved in organized crime, and claimed to have killed the constables because the police were hounding his family.

More than 100 raids were carried out as part of Challenger. Over fifty people have been arrested, and quantities of narcotics, counterfeit and stolen goods, and real firearms have been seized during the raids.