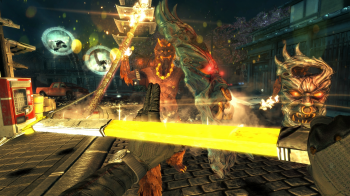 Shadow Warrior and Telltale's The Walking Dead are teaming up to bring the finest in zombie-slaying weaponry to Lo Wang's arsenal.

Sharing is caring, as they say. And if that's true, then the folks at Devolver Digital and Flying Wild Hog (publisher and developer of Shadow Warrior) are one heck of a caring bunch. Shadow Warrior's ninja protagonist has an ever-increasing collection of weapons licensed from other games, and as of today that list is a little longer. The game's creators have announced a partnership with Telltale Games to allow Lo Wang to use Molly's ice axe, "Hilda," from The Walking Dead adventure game.

This is the fourth licensed weapon Shadow Warrior has borrowed from other games. Wang recently got his hands on Saints Row's iconic Penetrator, and can also use more mundane crossover weapons like the sledgehammer from Serious Sam 3 and the katana from Hotline Miami.

I guess the logic is sound from Wang's perspective - if it's good at killing zombies, it should be good at killing demons, right? Weapon effectiveness aside, though, Hilda isn't terribly recognizable, only appearing in one episode of The Walking Dead. The katana and sledgehammer are similarly bland, but hey, it works. And we probably should expect nothing less from Devolver Digital CFO Fork Parker. "As a fan of The Walking Dead, I'm super excited about this fantastic cross promotion with our beloved Shadow Warrior," Parker says. "As a fan of money, this certainly helps quite a bit as well."