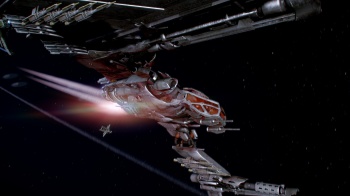 Can anything stop Chris Robert's Star Citizen? Roberts has announced that the game's crowdfunding campaign, which has been on-going since its initial Kickstarter, has now reached a cool $25 million dollars. That's a big wad of cash eager fans have shelled out on a game that hasn't even been released yet. The $1 million needed for its latest stretch goal was reached in just four days, securing Australian and European servers for the game's impending alpha.

"We will use additional funding to build a wider alpha test than we had originally intended for the first phase of Star Citizen's launch. The initial plan was to first launch servers in North America and then expand to areas such as Europe and Australia to decrease latency in these areas, perfecting the game as we improve the experience around the world. This funding will allow us to invest in a wider infrastructure for our early testing, spinning up remote servers earlier. Hitting this goal will also allow us to increase the number of remaining alpha slots. Extra alpha slots not only means more Star Citizens will travel the 'verse at launch, but that we will receive more feedback and more stress testing. This in turn will allow us to better balance and enhance the Star Citizen experience!"

I'm sure the people who told Roberts that his "space simulator mmo thing" was far too "niche" to be profitable are feeling quite red in the face about now. If nothing else, he has certainly proved that crowdfunding can be a perfectly viable alternative to the traditional publisher-developer relationship.

Have you put money down on Star Citizen yet? I haven't, but being an Australian, this latest goal might just tempt me into buying in.