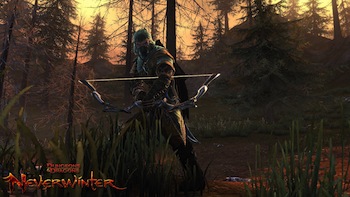 The F2P MMO gets a new class, campaign, and paragon paths.

Just like the sun, MMO's are bound by laws that require constant expansion. Heck, even the original Everquest still gets regular expansions. After launching this summer, Cryptic's Dungeons and Dragons MMO Neverwinter is already getting a second helping of content with Shadowmantle. It adds a new class, campaign, type of item, andnew paragon paths, all for free.

Shadowmantle takes the adventure deep into Neverwinter Wood, because scary things live outside. The new campaign revolves around the Dread Ring, a massive structure built for mysterious ritual magic that your mom totally told you not to play around.

The module also brings the Hunter Ranger as a new (and still free) class. It's a hybrid class that can freely switch between a long bow and dual blades, with a different sets of powers for each weapon. Even if you don't feel like rolling up a new character, every other class is getting access to a second paragon path, giving high-level characters more options to customize.

What's an adventure without loot? Shadowmantle's introducing new equippable Artifacts. These rare items get their own hotbar slot and can give players various passive and active bonuses. Artifacts can do everything from provide a stat boost to summon a shopkeeper.

Shadowmantle should go live before the end of the year, but you can currently sample it on the public test server.