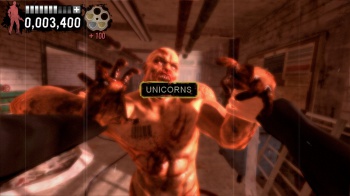 Typing of the Dead: Overkill just arrived (very unexpectedly) on the Steam store, which means PC players can now suffer like G did.

It's a scientific fact that humans learn skills more quickly when failure means getting killed by flesh-eating zombies. That's the logic that inspired Typing of the Dead, the classic horror-comedy game that took the campy House of the Dead lightgun series and retooled it as an educational platform to improve typing speed. As a surprise Halloween treat, SEGA has just published a new TotD game on Steam - Typing of the Dead: Overkill, based on 2009's House of the Dead: Overkill which somehow went three years without an educational spinoff.

Typing of the Dead: Overkill actually includes a full port of the original HotD:O game, if for some reason you want to shoot zombies instead of type at them, but that's such a waste of a learning opportunity. In the Typing variation, you'll move through grisly environments just like a rail shooter, but rather than relying on pinpoint accuracy to fend off the undead, you'll have to quickly type words and phrases as they appear on the screen. The game looks like it's easily expandable, with support for custom dictionaries and two-player co-op coming soon as free DLC.

There isn't really any particular demographic for this game - it definitely isn't meant to teach children how to type, because roughly half of Overkill's dialogue is F-bombs. Still, everybody can enjoy the surreal comedy of frantically typing "Is it too late to shake hands" as a bloodthirsty zombie attacks. If you're up to the test, the game is half-off for the next couple days as part of Steam's Halloween sale.