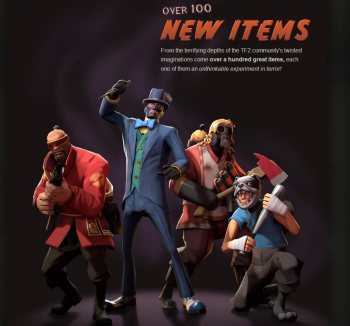 Didn't there used to be an FPS under this hat-simulator?

It's Halloween and you know what that means? That's right, time for the annual "Scream Fortress" Team Fortress 2 Halloween event! Yesterday we saw the teaser comic, and now the update is live, adding over 100 new items (mostly hats) to Valve's war-themed hat-simulator. Hooray!

As well as the new cosmetic items, which can be earned via in-game drops or through Valve's Mann-co store, the update brings with it a new map, the return of Halloween spells, and some kind of Skeleton onslaught event called "The Witching Hour."

Keen-eyed fans have also spotted a bunch of encrypted messages written in Agathodaimon symbols on the official update page. Whether this is leading to some kind of ARG or just Valve messing with us is still to be discovered (in b4 "Half-Life 3 confirmed").

All of this stuff is of course free to existing players of the game, which is now free-to-play, so I guess that means it's free to everyone. If you boot up Steam you'll start downloading it automatically, so enjoy it while it lasts, as the event will only run until November 11th.