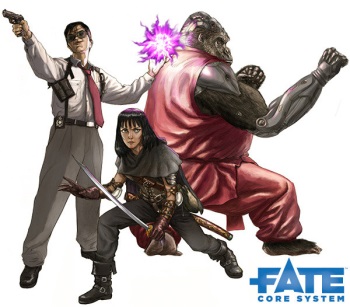 Ever wondered why, as an international Kickstarter backer, you just can't catch a break?

Kickstarter's a great crowdfunding opportunity for gamer and game maker alike, but if you don't happen to live in the US and are relying on international shipping to get the job done, you may have noticed that large chunks of your flesh are gouged out each time you make a pledge. Evil Hat, best known for its FATE RPG system, has run one or two Kickstarters, and Fred Hicks knows the international shipping blues better than most. There are three choices, says he, and none of them are good.

You could decide not to offer international shipping. People will complain. Or you could offer international shipping, but at an eye-watering - honest - high price. People will complain. Plus, much of that high price is shipping, which means that a pledge worth, say, $50 to your pledge goal only nets you, say, $20 actual funding capital. That effectively hurts your crowdfunder, by draining cash from the project while making it appear as though the goal's being reached quickly. Or - and this is the fun one - you could offer international shipping at a cost the customer thinks is fair, but effectively wipes out any value from the customer's pledge, as shipping eats up the rest. People won't complain, but you will. Or cry yourself to sleep at night, whichever best suits your personality.

But why not wait until after the Kickstarter and bill for shipping separately? "Because international backers don't realize exactly how high a charge that will be," says Hicks, "and the sticker shock will produce a lot of anger, especially amongst those who didn't bother to read the pledge tier text closely." It doesn't help that prices change all the time - the US post is legally constrained from raising domestic prices, so international price gouging takes up the slack - and the lead time between end of Kickstarter to shipping of goods can be something like 6 to 12 months. You can easily get into trouble by assuming, at the start of the process, that the price is X, only to discover at crunch time that the price went up to 2X. Or worse.

That's why Evil Hat doesn't do international shipping, and advises customers to buy its stuff from a friendly local game store. Digital customers, thankfully, don't have the same shipping issues, but digital isn't necessarily the best way of dealing with the problem. It works for video games, so long as you don't have your heart set on a boxed version, but what about books? Or the shirts, props, and other stuff that so many Kickstarters promise? The answer, according to Hicks, is simple but unfun: don't offer it to international backers. The money doesn't add up.