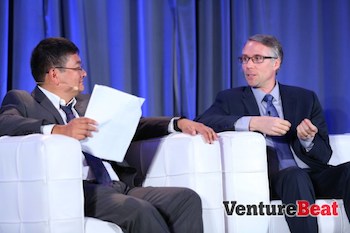 President Obama is "interested in" video games. How do we know? Because Mark DeLoura, the White House's senior adviser for digital media, says so. In fact, he says the president has a lot of thoughts about the role of gaming in the United States. Speaking at this week's GamesBeat 2013 conference, DeLoura talked about gaming presence in the White House, both inside and out of the oval office.

DeLoura worked in senior positions at Nintendo, THQ and Sony before heading to Washington to counsel the president on, among other things, the business and culture of video games in April. Apparently it hasn't been easy to get White House staffers, who are normally very serious and focussed on their work, to talk about games or play together. "Some people do play games in the White House," said DeLoura. "I'm trying to find those people and collect them, Pokémon-style." DeLoura says he has been trying to organization a weekly game of Civilization. I admit, I would love to see how that game plays out.

As for the commander-in-chief, DeLoura said president Obama thinks video games have a lot of potential as teaching tools, but "He [Obama] wants to see Sasha and Malia playing a game that teaches them something." DeLoura, whose team is currently looking for ways to bring gaming into classroom, added that he feels the private sector has not adequately invested in educational video games. DeLoura says the team has found a few gems, including Minecraft, but there needs to be a wider array of effective options.

DeLoura also addressed the issue of censorship in regards to the gaming industry. DeLoura feels the first line of defense for young players and their parents is a uniform game ratings system. DeLoura believes there is a lot of confusion when discerning whether a game's content is appropriate for children, especially when advertisements target young players.