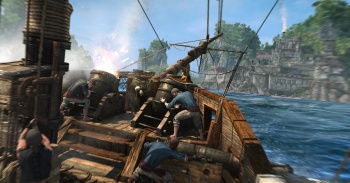 Ubisoft's Uplay Passport is required for access to your fleet in Assassin's Creed IV: Black Flag.

The fleet system in Assassin's Creed IV: Black Flag is unavailable for players who buy a used copy of the game or borrow the game from a friend if a game-specific code has already been redeemed. Ubisoft's Uplay Passport gates the content, GameInformer confirmed yesterday.

The Uplay Passport is different from being a registered Uplay user. Membership is free, but the Passport is a game-specific code included in new copies. The passport grants online access to multiplayer content, but it is also needed for fleet building in single-player content. Ubisoft states on its Uplay page that players can purchase a new Uplay Passport code online within the game. The Uplay Passport costs $9.99. Players using an Xbox 360 alternatively can spend 800 Microsoft Points. Activating a free trial gives temporary access to content that needs the Uplay passport.

Fleet building in the single-player campaign grants several benefits. When protagonist Edward Kenway conquers an enemy ship, he has a few options. One is adding the ship to the fleet. Similar to the assassin recruitment feature in Assassin's Creed: Brotherhood, ships will return from missions after a number of minutes in real time with spoils. However, in Brotherhood, this feature had an offline version. Players who want to take advantage of the fleet system will need the UPlay Passport and will also need to be online.

Online passes have gated off multiplayer content before, but the single-player experience is usually left alone. Those who buy used games generally do so to save money, but in Black Flag's case, that saved money would have to go toward buying an online pass if players want to use the fleet.