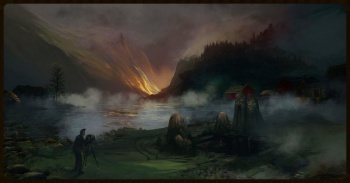 Red Thread Games will get a $144,000 grant towards Draugen, a survival horror game which draws heavily on Norway's landscape and mythology.

If you ever thought to yourself that the main thing missing from survival horror games these days is fjords, the Norwegian Film Institute agrees with you. They've just delivered a grant worth $144,000 to Red Thread Games, based out of Oslo, to help them develop their new survival-horror game Draugen, which is set during the 1920s in the landscape of western Norway.

Joking aside, the setting for Draugen actually sounds like an interesting break from the outbreak of zombie-themed horror games on the market. The first-person game casts you as an American nature photographer, botanist and entomologist who "delves into into the deepest, darkest secrets of a remote fishing community where every single soul has mysteriously vanished," according to Red Thread's website. The story draws heavily from Scandinavian fairy tales and Norse myths, and guessing from the game's description that seems to include things like strange little girls singing broken lullabies and a mysterious, black-garbed woman.

And for those interested, a "Draugen," according to Red Thread Games, is a mythological Norse creature, similar to a ghost but with a physical body, that usually resides in watery graves guarding buried treasures and secrets. The game is currently set for release on PC, Mac, Linux and next-generation consoles. No release date was listed on the developer's website.

Red Thread Games has assured fans that Draugen, composed of a new team within the company, won't interrupt progress on their upcoming game Dreamfall Chapters. That title took in approximately $1.5 million on Kickstarter earlier this year, well above its $850,000 asking price. Dreamfall Chapters is due in November 2014.