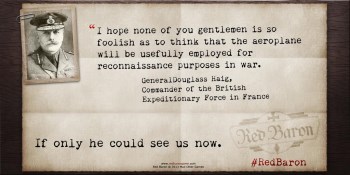 Red Baron creator Damon Slye admits that the Kickstarter for a remake of the game hasn't gone as well as he'd hoped.

It was a happy day last week when Damon Slye of Dynamix fame announced plans to bring the great First World War flight sim Red Baron back to life through his new indie startup Mad Otter Games, with help from Kickstarter. Things aren't quite so happy today, however, as the tepid response has forced the team to pull the plug.

"As some of you have noticed and mentioned, the Kickstarter for Red Baron hasn't been quite as successful as we had hoped. We are a new to crowdfunding, and in turn the Red Baron campaign didn't quite reach as many ears as we needed," Slye wrote in a Kickstarter update. "That being said, we are going to cancel the Kickstarter campaign... for now. We will still be moving forward with Red Baron with the plans to relaunch the campaign early next year."

Slye said Mad Otter will spend the next few months "honing our message and vision," and improving the game based on the feedback it has received so far. He also encouraged fans to get the word out and to stay active on Mad Otter's Red Baron forums, and as a "thank you" to supporters, he said that all forum members and everyone who follows the studio on Facebook, Twitter, Google+ or Tumblr and has pledged at the minimum purchase tier of $15 or more will be given alpha access to the game.

It's an unfortunate development for old-time joystick jockeys (like me) but my hope is that with some lessons learned and a greater sense of urgency among those who want to see Red Baron return, Slye and the family Otter can return next year and make this thing happen.