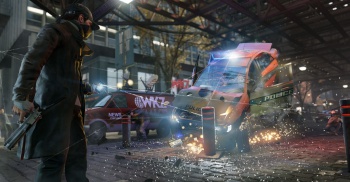 Sony's financials for the quarter ended September 30th are out, and don't make for cheerful reading. Sony wiped more than $151 million off of its operating income balance, a drop of 51% when compared to the previous year. A huge chunk of that is attributable to Sony's other interests; the flop that was White House Down hit its Pictures segment hard, and people really aren't buying Sony's cameras and televisions. Even the smartphone segment, which posted considerable sales gains, still made an operating loss.

But what of Games, you ask? Games made an operating loss as well, but a relatively modest $8 million down; it could have been worse. Part of that is attributed to a price reduction in the PS Vita, which encouraged sales but hit the bottom line hard. Software sales helped pump up the results, but the big problem for Sony's Game segment has been research and development costs for the PS4, due out this November.

Sony's changed its financial forecast for the year ending March 31st, 2014. It's cut its operating income forecast by 26.1%, and its sales and operating revenue forecast by 2.5%. But that doesn't reflect Sony's confidence in its Game segment, which it thinks will do well in the coming months; the revision has more to do with Sony's lack of confidence in its other business segments, notably Imaging Products and Home Entertainment.