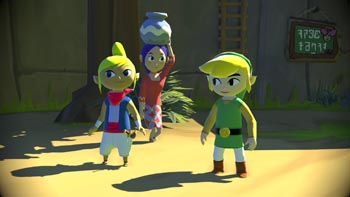 A collection of comedic short cartoons will launch on Nintendo Video on the 3DS tomorrow.

Launched in 2011, the Nintendo Video app of the 3DS receives little attention. Starting tomorrow, five series will be available for viewing on the free app, Nintendo announced today. Those who have already downloaded Nintendo Video will automatically receive the five shows, two of which feature The Legend of Zelda: Wind Waker HD and Pikmin 3.

The Legend of Zelda: The Misadventures of Link is a series of short cartoons featuring Link in a "new and hysterical light." The cartoon is based off of The Wind Waker HD, in which the remastered visuals go further in showing Link's range of emotions.

Pikmin Nature Documentaries is set up like a set of documentary shorts as a "tongue-in-cheek take on safari nature shows." The animation explores the world of the Pikmin.

Bravest Warriors, a show created by Pendleton Ward, the man also behind Adventure Time, follows four teenage heroes who save the world with their emotions. The series launched on the Cartoon Hangover channel on YouTube with the second season having premiered earlier this month. New episodes will appear on Nintendo Video every Friday.

Wildheart Riukiu is a series of 3D short cartoons, which Nintendo characterizes as "ninja puppets." The show comes from the creator of Meat or Die, a show already on Nintendo Video.

The fifth show, like Bravest Warriors launched on Cartoon Hangover. Bee and PuppyCat, created by Natasha Allegri, follows an unemployed 20-something woman named Bee and a creature named PuppyCat. Bee and PuppyCat work intergalactic temporary jobs to pay their rent. Allegri has also worked on Adventure Time in which she created the gender-swapped characters Fionna and Cake.