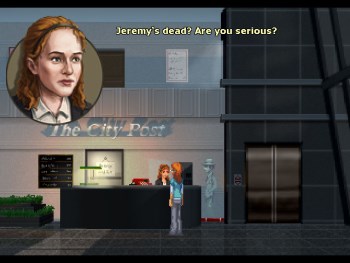 The Blackwell Deception Halloween giveaway is a sad lesson in why we can't have nice things.

Wadjet Eye Games did a real solid for adventure fans on Halloween, making Blackwell Deception, the most recent game in the Blackwell series, free for everyone until midnight on November 1. But the promotion ended early, leaving many who found out about it later in the day with no game and no explanation as to why.

It turns out that, as is so often the case, no good deed goes unpunished. Wadjet Eye founder Dave Gilbert told Red Door Blue Key that things went off the rails very quickly when he discovered late Wednesday evening that the Steam keys being generated for the giveaway actually contained the company's entire catalog of games. Gilbert eventually found an option in Steamworks that retroactively removes games from Steam keys, but a few hours later he learned that the offer was so popular it overloaded the servers at sales provider BMT.

"I looked into it and discovered why. People were ordering multiple copies of the game - hundreds at a time. And collecting Steam keys for reselling later," Gilbert said. "This is something I didn't anticipate happening, so I removed the Steam keys from the giveaway and placed the game on a few other websites to use as mirrors. BMT made the game live again, and I hoped that was the end of it."

Alas, it was not. The removal of Steam keys led to "a large number of angry emails and tweets" from people outraged that they couldn't get their free game on Steam, so Gilbert and BMT got together and set up a "one code per IP" system, returning Steam keys to the giveaway. Naturally, that brought the resellers back, who "easily masked their IPs and began chewing through the Steam codes again."

This whole thing has made me terribly terribly sad.— Dave Gilbert (@WadjetEyeGames) November 1, 2013

At that point - and remember, Gilbert had been doing all of this for a freebie - he gave up and canceled the whole thing. "I had been monitoring the giveaway and dealing with the Steam issues and download problems for 36 straight hours and I was exhausted," he said. "There was only so much work I was willing to do for a free giveaway, and I had reached my limit. I told BMT to cancel everything and put the regular sales page back up. I finally collapsed to get some much needed sleep!"

But even that wasn't the end of it. Gilbert discovered upon waking the next morning that BMT had removed the link to the Steam key generator, but not the generator itself. A working link to generator made its way online and 30,000 Steam keys were swiped before he woke up. He's now trying to get those keys disabled.