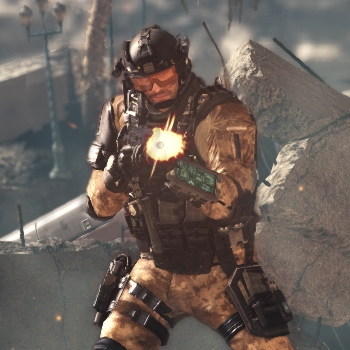 The preorder bonus Free Fall map is available to both digital and physical customers, and console download sizes range between 9 GB to 13.5 GB.

Curious about the difference between what comes on the disc and through the tubes of the internet? Activision Community Manager Dan Amrich stated today that the only difference between physical copies of Call of Duty: Ghosts and digital ones is the delivery method. "The data on the disc is exactly the same data that you'll find in the digital download," says Amrich. The preorder bonus map, Free Fall, is available to both digital and physical purchases. A trailer for the multiplayer map was released yesterday. Amrich also revealed that the size of the digital download for consoles will range from 9 to 13.5 GB, a much more comfortable number than the 40 GB needed for the PC version. The range in download size is largely due to localization for the game.

There is a small difference in exactly how to get the bonus map on consoles. Digital preorders for the PlayStation 3 will automatically have the Free Fall map bundled with the game. To receive the bonus map on Xbox 360, you must be enrolled in the Xbox Live Rewards program and purchase the digital edition of Call of Duty: Ghosts before November 18. After November 18, the Free Fall map download will be distributed by email as a download token. Xbox Live Rewards is a free rewards program from Microsoft. The Xbox 360 Free Fall offer is available to those in the US, Canada, Mexico, Germany, Australia, New Zealand, Singapore, and Hong Kong.