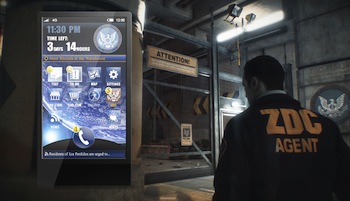 Smartglass integration lets you recieve calls from characters and use in-game apps on your real-life phone.

While the WiiU is built around the use of a hand-held second screen, don't forget that the Xbox can do it too. Microsoft's Smartglass app turns any Android and iOS device into a second screen for game designers to play with. While games like Halo 4 only use it as an alternate way to check player stats, Capcom wants to take things a bit further. In Dead Rising 3, the Smartglass app turns your real-life phone into an in-game phone, letting you use it as a GPS, check the news, and make and receive calls, all inside the gameworld.

"We wanted the player using our app to look at their own smart device and feel that they had just plucked it off a rotting corpse in Dead Rising 3," writes senior designer Brent Arnst. "But of course it wouldn't be a phone unless players could have the experience of having the phone, or tablet, call them up! That meant we needed a living, breathing character that could phone or text the player at any time to offer advice, new missions or tempting prizes."

The Smartglass app includes all the typical features you'd expect, like "a map, a news feed with unique news stories, a hint app and mission tracker, and even a settings app to customize the player's ring tones and background wall paper." However, it also lets the user do handy things like call down military strikes or drop flares that distract zombies.

Turning your real-life phone into an in-game phone is just weird enough to be really awesome. However, the last time a game gave me an in-game cell phone, Roman kept calling me up to go see "big American titties."