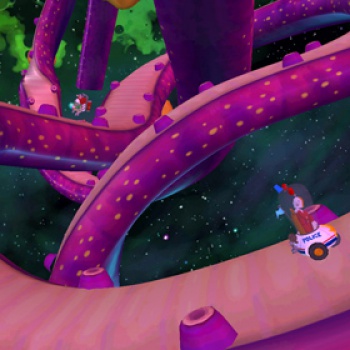 A quick look at a VR Race/Chase flight sim due out in late 2013.

Joseph Campbell famously said that there was really only one story, endlessly retold, in the history of human mythology. Someone else got the roster up to three: "Boy Meets Girl," "Boy Loses Girl," and "Boy Versus the World" (or Gain, Loss and Conflict if you want to be less colorful.) In the movie business, fresh stories are often pitched in terms of existing works mashed together or dropped into new circumstances - "It's Forrest Gump meets Ninja Assassin!" "It's Die Hard in a piano factory!"

Until recently, video-games could mostly boil their summations down to a previous game wearing some new skin; ("Mega Man but with tropical frogs in Rekjavik!" ) but it was only a matter of time before combo/remix concepts started to become commonplace in their own right. Case in point: Defective Studios upcoming candy-colored scifi indie Gimbal Cop is best described as Snake crossed with Super Mario Kart.

The game is a multiplayer racer where players either control Runners, who race on the track, or The Architect, whose vehicle takes the lead and expels the track behind it like a solid vapor-trail. The goal of the Runners? Catch up to The Architect. The goal of The Architect? To avoid being caught, by directing the shape and hazard level of the track itself.

I got introduced to the game in its Occulus Rift VR build (Defective is targeting a broad multiplatform open alpha launch for late-2013) at an official meetup for the ubiquitous crowdfunded headset tech at Microsoft's NERD Center in Cambridge. The full race/chase mode wasn't up for use, but I got to go hands-on with a free-flight mode offering some sense of what it's like to move through open space as The Architect.

If you've ever tried the Rift (or any of the other recent experiments in Virtual Reality interface) yourself, you already know that a certain amount of initial disorientation is normal. Seasoned gamers, of course, are used to the idea of changing first-person perspective on two planes (one analog stick to move an avatar, the other to move camera or perspective) but VR adds the ability to change gaze by the movement of one's own head and the tendency of eyes to move around across the UI. It's a sign of good development when that disorientation is over quickly, and Gimbal Cop's solid flight mechanics and abundance of well-rendered graphical reference points allowed me to acclimate quite quickly.

The demonstration itself was fairly basic but also deceptively simple looking: Fly cleanly through hovering rings, picking up power-ups that increased my speed. I'm not a terribly good pilot to begin with (I'd only just finished a several day run of mostly-unsuccessful attempts to get better at GTA V's helicopter missions), and the visceral charge of being "in" the cockpit is the opposite of calming distance, but I managed a few good swoops through before it was the next journo's turn at the controls. So, if nothing else, take away that if I can fly reasonably well in this, you probably can too.