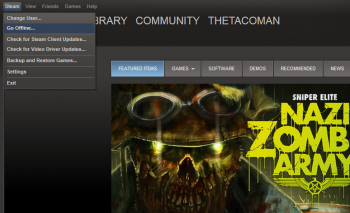 The fact that Steam requires you to go online once every few weeks is a bug rather than intentional design, according to Valve.

Steam has an offline mode, but, since the vast majority of Steam users don't really use it (who doesn't have their PC constantly connected to the internet these days?) it sort of sucks. Valve says that this isn't good enough, and is working to make it not suck so much. In particular, the fact that Steam requires you to go online once every few weeks is a bug rather than intentional design, and something the company aims to fix.

"There are many components involved in Offline Mode," writes Valve poster Henryg in a post on the official forums, "some of them have known issues and bugs which we are continually working to improve. We're aware that it doesn't always work as flawlessly as we want it to, but please keep reporting bugs with Offline Mode. It is not broken 'by design'."

Henryg also mentions that Valve are planning to completely overhaul the way Steam authenticates its games in the near future. Anyone who has had problems with Steam in the past knows of the dreaded ClientRegistry.blob file, which, thankfully, will soon go the way of the dodo. "Some day soon, once this work is completed, we will eliminate the old authentication system and Offline Mode should immediately become much more robust."

Back when everyone was up-in-arms about Microsoft's vision of an always-online Xbox One, no-one was willing to talk about the elephant in the room: Valve's Steam. It is technically already an always-online system, as a large portion of it's library doesn't function properly without an internet connection, and you had to go online to authenticate every game purchased on the system at least once. Good to see them taking steps to improve it.