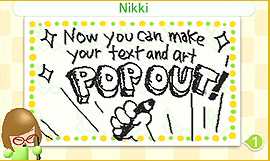 This may shed some light on why the service's online functionality was suddenly shut down earlier in the month.

Two separate reports, one from the Yomuri online and another from Mainichi, have come in, each reporting a separate instance of a child predator using the Nintendo 3DS' online functionality in their crimes. This may help to explain why Nintendo unexpectedly shut down the service's online functionality earlier in the month. Nintendo cited the exchange of "offensive material" as the main reason behind the shutdown.

In the Yomuri report, two men aged 49 and 36 in Japan were recently arrested for performing "improper acts" with a 12-year-old girl on multiple occasions. The girl met both individuals through her Nintendo 3DS, though it does not specifically mention the SwapNote application.

In the Mainichi report, however, charges for child pornography were filed against a 44-year-old man who had two girls (aged 11 and 12 at the time of the incident) send him nude photographs via SwapNote, something which the man himself has confessed to.

While Nintendo has not specifically stated that either of these two cases had any bearing on its decision to discontinue the SpotPass function of SwapNote, the timing does seems to add up. There's no word from Nintendo on whether any other applications will have their online functionality suspended, or if we will ever see SpotPass return to SwapNote.