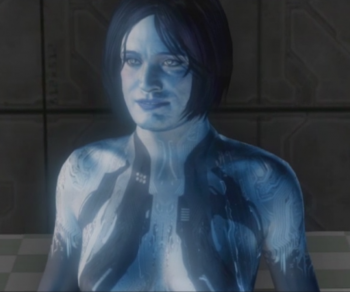 Halo 4 is now a year old, which means it's time to break out the embarrassing baby pictures.

Time really flies when you're mowing down aliens, doesn't it? It's been a full year since Halo 4 hit shelves, and luckily for us, 343 Industries has a birthday present for the internet! It's a blooper video from Halo 4's pre-release days, that magical time when the game is polished enough to immerse you but still rough enough that some misplaced code can send the virtual world spiraling into shenanigans. You can check out the video over at Halo Waypoint.

The video begins with 343's franchise development director Frank O'Connor asking us to join him in reminiscing about our fond memories of Halo 4, but you already read this article's headline so you know what's really coming. Text wouldn't really do it justice - character models inflate like balloons, an automatic rifle spews cars instead of bullets, and one of the game's developers finds his face transplanted onto Cortana. It's... bizarre, to say the least.

It's a short video, but fun to watch. With the new console generation right around the corner, it's good to remember that no matter how realistic the graphics get, all it takes is one bug to turn a game into a digital circus. In fact, I hope we get more of these outtakes from games in the next generation. There's nothing quite like watching an immersive world break down into unbound chaos.