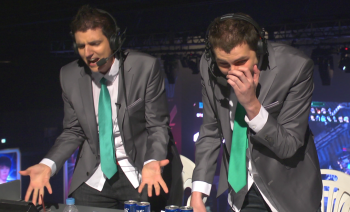 How exactly does one end up in South Korea providing commentary on a real-time strategy game? The ambitious and sometimes controversial project Sons of StarCraft from director Jeffrey Alejos promises to answer that question. The documentary aims to uncover the story behind the professional gaming careers of Nicolas "Tasteless" Plott and Daniel "Artosis" Stemkoski, a pair of eSports commentators who moved to South Korea to provide English commentary on professional games of StarCraft: Brood War. The duo, known collectively as "Tastosis", have contributed significantly to the growth of professional StarCraft play worldwide. The documentary aims to tell the story of the risks and sacrifices these two men made to become the renowned StarCraft personalities they are today. The documentary will be released in four episodes, beginning on November 14. The episodes will be hosted by onGamers, formerly known as GameSpot eSports. The latest trailer for the documentary is aavailable now at onGamers.

Alejos ran a Kickstarter campaign in 2011 to raise funding for the documenary. The campaign goal of $18,400 USD was exceeded by 229 percent, raising $42,155 from 881 backers. The original release date of October 1, 2012 soon slipped. The extra funds expanded the scope of the documentary, allowing Alejos to spend three months in Seoul, South Korea instead of the originally planned one month. Alejos was also able to cover additional events, travelling to four different countries along with Plott and Stemkoski. A full list of the events covered and StarCraft professionals interviewed was shared by Alejos on January 10, 2012. The first trailer for the film was released October 19, 2012. The latest update for Kickstarter backers was October 20, 2012, announcing that the release date had been pushed back to spring of 2013. Backers began to lose faith that the film would be completed, but a cryptic update on the film's Tumblr on September 4 hinted that the film was near completion.

Kim Rom, editor-in-chief of onGamers, announced November 8 that the first part of Sons of StarCraft would premiere November 14. After meeting Alejos last year, Rom says that "it became apparent that progress on the movie was slow, the scope of the movie had increased dramatically and expenses had piled up. ... A while back we decided to help out with funding so Jeff could staff up and get back to full time production." According to Rom, the documentary will be available as a feature length movie next year for Kickstarter backers, and on Netflix. In the words of Stemkoski and Plott, I've got nerd chills.