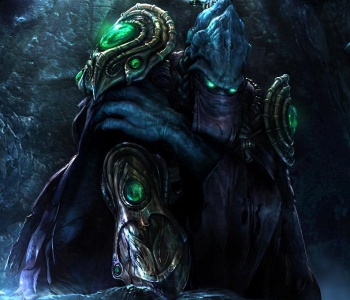 StarCraft 2's Protoss expansion isn't out yet because its units don't feel like the Protoss.

Speaking personally, I've never been one to wait patiently for a hotly anticipated game. Whether it turns out to be a critical success or underwhelming flop, I just want the thing in my hands so I can play and judge for myself. That being said, sometimes games need the extra development time because of bugs, unexpected setbacks, or even internal strife.

So exactly what reason does Blizzard have for keeping StarCraft 2: Legacy of the Void from us? It already took 12 years to get the first StarCraft sequel out the door, and Heart of the Swarm suffered its own delays. Why can't Blizzard just get us our expansion about technologically advanced Protoss? According to game director Dustin Browder, it's simply because the Protoss don't feel like Protoss yet.

"The missions are coming along," Browder said at BlizzCon 2013. "I'm pretty happy with the story, but the missions need some more work and the campaign mechanics -- like how you progress as the Protoss -- needs some more work before we are ready to show anything."

When pressed, Browder added that "it didn't feel like you were playing the Protoss. You want to have that feeling like 'We're the Protoss. We're these bad-ass space Samurai. We're going to lay down our lives for the greater good ... oh, and by the way, we could glass you planet if you mess with us.'"

The issue is complex because, from a developers perspective, Protoss shouldn't be powerful in the same way Terrans or Zerg are. Unlike Heart of the Swarm, where Kerrigan could fight armies by herself, Protoss strength is based in advanced technology, not the strength of individual units. "That felt great for the goddess queen of the Zerg. But that's not what I want the Protoss to feel like," Browder said. "There's no one Protoss warrior who should be out there destroying whole armies by himself. Maybe Zeratul, but he'd have to be sneaky about it.