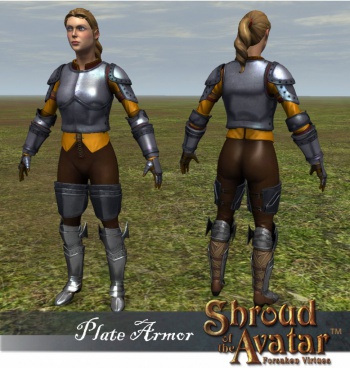 Richard Garriott's Shroud of the Avatar will never destroy player-made items, but leaves them behind for someone else to find.

One of the unique aspects of Kickstarter-backed gaming is that developers have free reign to make whatever projects or features they'd like. One such developer is none other than Richard "Lord British" Garriott, whose proposed Shroud of the Avatar MMO doubled its $1 million goal. With Shroud's finances secured, the question now is what Ultima's creator will do to make Shroud stand out. Garriott's response? Use permanent player-created items to give every in-game object a sense of weight and history.

"If someone's ever killed 100 orcs with a sword, that sword would have the tag 'Orc Slayer', Garriott recently told WarCry. "All of that data is already on the weapon, so why destroy this thing that has this real history? So why not recycle that right back into the game? And that way the actual sword, the actual history, is still a part of the game. You can go find the person who made it."

While Shroud of the Avatar will create a few initial items to get players started, literally everything else will be player-generated, including weapons found in dungeons. According to Garriott, destroying items that have such unique histories would be a waste, so they'll remain a part of the MMO world. Replacing, selling, or even dropping an item won't destroy it, but leaves it behind for another player to discover.

The full interview describes other plans Garriott has for Shroud of the Avatar, but this take on player-generated items could have the biggest impact. We've already seen legal battles over virtual property that really isn't unique within the game world; imagine what will happen once players can create objects with literal in-game history. Everything from virtual property theft to collecting in-game artifacts would have massive effects on Shroud's world and economy. We'll have to wait until Shroud of the Avatar's 2014 release to see how it all plays out.