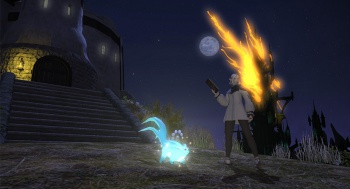 Square Enix has become more focused since its overhaul of Final Fantasy XIV: A Realm Reborn.

The "games as a service" model is gaining popularity within the industry in which some games are free to play but require microtransactions to gain access to content further on and require an internet connection. Players often don't want to hear about a game being a service rather than a product. Square Enix recently released Final Fantasy XIV: A Realm Reborn, an MMORPG in which, like other MMORPGs, the player must be connected to the internet and pay to play the online game. Phil Rogers, Square Enix's CEO of US and Europe, wants to set apart what "games as a service" is to Square Enix.

"There's lots of talk in the industry about games becoming services - to be honest as an expression this doesn't always resonate with people, especially gamers," Rogers said. "For us, online is a way to facilitate how we're looking at the word service to build on a game. So we're focusing on regular content updates, engaging gameplay mechanics, replayability, and deep community."

The online business is what united Square Enix because the whole company was working on a single product, Rogers said. The company plans to continue working on the online business, prioritizing online play and components in well-established franchises and new projects.

"We know that an MMO is all about the content and FFXIV is no exception," Rogers said, "and we have a robust content update plan in place to ensure we are offering huge updates on a regular basis, with the first scheduled for this December."

While some games launch and quiet down once most people have finished playing, some games in the service model have active engagement for years. Rogers points to Avalanche's 2010 gameJust Cause 2, which half a million active users still play.

"That's a lot of people still engaged in the game," Rogers said. "So it's incredible to look at facts like that and to challenge our teams building new games to think about long-term engagement."