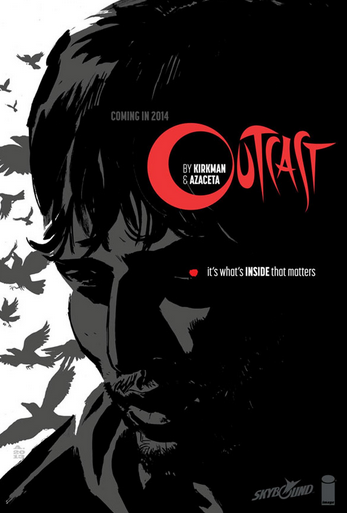 Outcast hasn't even seen print yet, but Cinemax has faith in The Walking Dead's creator.

Robert Kirkman, he who gave us The Walking Dead, Rick, sword-wielding crazy women, zombies, lunatic survivors, prisons, Carol, zombies, the flu, and more zombies, has a new comic due in 2014. Outcast, the story of demon-haunted Kyle Barnes, has yet to see print, but that minor detail seldom matters to TV moguls. After a bidding war, Cinemax won the rights, and has given a script commitment; the pilot will be co-written by Kirkman himself, working in tandem with The Walking Dead's David Alpert.

Outcast is Kirkman's second shot at the horror genre; he's more of a superheroes guy at heart. "I think Kyle Barnes is every bit as compelling as Rick Grimes and demonic possession is way scarier than zombies," says Kirkman, "so this is going to be fun!" As with his zombie story, this is a cast-of-dozens kinda gig, and while it won't be quite as much of a bloodbath as The Walking Dead, viewers shouldn't get too attached to the cast. With the possible exception of Barnes, everyone's expendable. Or, as Kirkman puts it, "there certainly is an element of, 'No one is safe.'"

At least Kirkman knows where he wants the series to end up. This is the first time he's started a project knowing what the finish line will look like. It may go on for years - or so Kirkman hopes - but there's a definite end in sight. If you were at New York ComicCon this year, you might have had a glimpse of what Kirkman has in mind for his exorcism comic; but if not, you'll have to wait till early 2014, when this Image title sees print, to find out what's in store. There isn't a firm air date for the TV series yet.