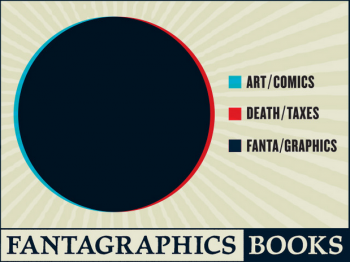 Fantagraphics Books, the publisher behind so many graphic novels it's mind blowing - Love and Rockets, Castle Waiting, Palestine, Ghost World - had trouble earlier this year when its co-founder and editor, Kim Thompson, died. The company soon found itself struggling with significant cash problems. What to do when that happens? Turn to Kickstarter, as everyone and their dog knows by now, and Fantagraphics managed to raise $150,000 within a week, as its fans rushed to help it.

"Our highest priority has always been the books themselves," says co-founder Gary Groth. But Thompson's sudden illness and unexpected death knocked back spring season production, and could have sunk the publisher if something wasn't found to make up the shortfall. A larger publisher would have had cash in hand to cover this kind of crisis, but Fantagraphics didn't have the means. Bank loans, investors and another mortgage were considered, but Groth decided that Kickstarter was the best way to keep the publisher going on schedule.

"It is customary here to say that the reaction is humbling, and it is," says Groth, "but it's something more, too: It serves as a confirmation that what we spent a lifetime doing is worth doing." If you're interested in learning more about the Kickstarter, or maybe kicking in a couple bucks yourself, take a look over here.