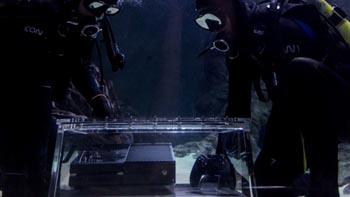 No kiddies in New Zealand are getting too close to this Xbox One before launch.

Leading up to launch parties in Auckland, New Zealand, an Xbox One is sealed in a water-resistant container in a shark tank at Kelly Tarlton's SEA LIFE Aquarium. The console will be on display for a week in an amusing and unorthodox manner of PR.

Twenty sand tiger sharks guard the Xbox One and can easily hunt down prey in packs. Even though sand tiger sharks look terrifying, they are generally placid. Thankfully, these sharks won't be getting into any fits of gamer rage.

Those who pre-ordered an Xbox One from EB Games in Auckland can attend a launch party hosted by Xbox at Auckland's Shed 10 the night before the new console launches. Several large cities, such as New York, London, Paris, Toronto, and Sydney, have their own large events. Spike TV, Xbox.com, and Xbox Live will showcase selected events in a live broadcast. More than 10,000 retail locations across the world will launch the console at midnight. New Zealand kicks off the launch first.

This shark-guarded console will go on sale Nov. 22.