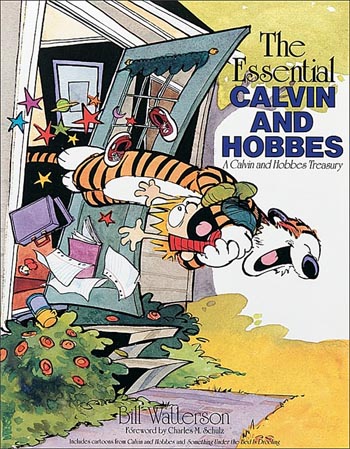 The fan-favorite comic Calvin and Hobbes is available in ebook form as three books.

Bill Watterson's comic strips of a young, imaginative boy named Calvin and his stuffed tiger friend Hobbes are available as ebooks for the first time. Before now, Calvin and Hobbes were available on mobile devices through comic apps, and now you can download the comic through Amazon's Kindle store, Apple's iBooks store, and Barnes and Noble's Nook store.

The full series is not available in this format, but a large portion of the comic strips are in the three volumes: The Essential Calvin and Hobbes, The Authoritative Calvin and Hobbes, and The Indispensable Calvin and Hobbes. The publisher, Andrews McMeel, prices each ebook at $12.99, and paperback versions are $18.99. However, prices vary by ebookstore.

Watterson's first Calvin and Hobbes strip came out almost 30 years ago. Running for 10 years, the daily comic strip followed Calvin's antics from school to home, and Watterson made some hilarious and creative Sunday strips. A huge compendium of the comics in four volumes has not made an ebook debut sadly. By the time Watterson retired in 1996, Calvin and Hobbes had appeared in more than 2,400 newspapers.

"Calvin and Hobbes made a remarkable, enduring impact upon arrival in newspapers and printed books," Andrews McMeel chairman John P. McMeel said in a press release announcing the ebook editions last month. "We are thrilled their debut in ebooks will mark the beginning of another magnificent chapter in their adventures for established and new generations of fans to enjoy."

Balloons and a Chair: The Only Way to Fly (to France) Andy Chalk 62 Comments

Critical Miss: Erin and Hobbes The Wooster 111 Comments
Comments on