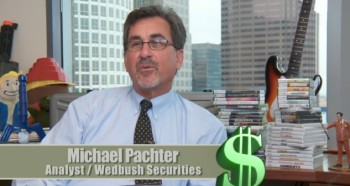 Michael Pachter expects that the PlayStation 4 will edge out the Xbox One in the next round of the console wars, but says that in the end it might not matter.

The next generation of consoles is upon us, and that means it's time to start arguing. And nobody kicks off an argument like Wedbush Morgan analyst Michael Pachter, a man of many opinions who isn't afraid to share them. Speaking at the London Games Conference, he gave the next-gen console crown to the PlayStation 4 by a narrow margin over the Xbox One, saying he expects the PS4 will move 100-120 million units over its lifetime, while the Xbox One will manage 90-110 million.

The PS4 will come out on top, he said, because of its price advantage and the simple fact that gamers aren't actually interested in Kinect, which Microsoft is betting heavily on with the Xbox One. He also said, however, that the TV functionality could prove to be a "killer app" for the Xbox One, particularly if it can offer subsidies on service.

But while he thinks the Xbox One and PlayStation 4 will keep it close, he described the poor Wii U as "toast." "We think 30 million is where it is set," he said. "If you are a Nintendo fan bitching about my opinion on Wii U, stop, put your money where your mouth is and buy a Wii U."

Interesting advice, although it might not matter in the end, as Pachter also believes that this console generation will be the last of its kind. "Consoles may not be relevant in 10 years," he said. "We have expanded the market beyond the hardcore console owner. We now have ten times the audience over the internet, six times the audience over mobile. And I think one day you'll get to play any game, anywhere on any device."