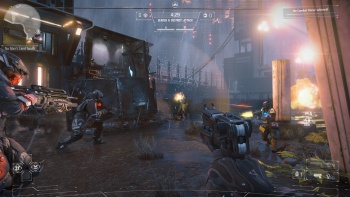 Yoshida believes reviewers were rushed into finishing games in time but is confident about the "new era of PlayStation."

The gaming industry is changing just like the medium, and Sony Worldwide Studios' Shuhei Yoshida calls the PS4 generation a transitional generation. The console launches tomorrow, but reviews for launch titles such as shooter Killzone: Shadow Fall and action platformer Knack have left much to be desired. Yoshida is disappointed to see low scores for these games, but he believes players will be happy with the PS4 launch games.

"I haven't spent enough time reading reviews, but I would characterize them as mixed," Yoshida said. He believes the low scores are due in part to the amount of launch games coming out, giving reviewers a lot to do in little time. "It's disappointing, but I don't think it's worrisome for the launch of the system. I've played through all of our games, Killzone, Knack, and [side-scrolling shoot 'em] Resogun, and I totally enjoyed playing through these games... These games really grow on you when you play more."

Mark Cerny, creative director of Knack was also the PS4's lead architect. When asked if Cerny's time was split between the two, Yoshida said his communication with the team for Knack was good as he was in Japan for a week every month. Yoshida added, "The game uses only three buttons to play, so it's not the type of game reviewers would score high for the launch of a next-gen purchase; you know, people may purchase PS4 for Call of Duty or Assassin's Creed or Killzone, but if they also buy Knack, this is a game that you can play with your family or your significant other."

The PS4 still has many high-profile games set to launch next year. Yoshida noted launch titles are difficult because "the ambition level has to kind of be kept in check; the team has to rely on tried and true mechanisms." That would explain why launch titles for the PS4 don't seem to be pushing the boundaries of the next-gen console, but there's still more videogames to come.