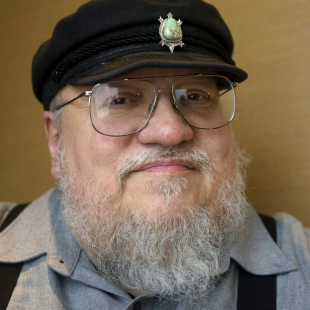 George R.R. Martin, the man behind A Game of Thrones, would prefer his creations not be tampered with by outside authors.

Unexpected and often shocking deaths are kind of par for the course when you're dealing with A Game of Thrones and A Song of Ice and Fire. We won't go into any spoiler-ific specifics, but suffice it to say that if you're a newcomer there are moments that will gut punch you like Ivan Drago. That being the case, all the fatalities in Westeros could pale in comparison to the damage done by one real world death: George R.R Martin's.

Martin, in addition to being the author and architect of A Song of Ice and Fire is also a tad on the elderly side and, if the five years it took him to deliver the most recent book in the series is any indicator, there is a very real possibility he might not live long enough to bring the franchise to a close. It's a possibility that Martin himself is very much aware of. "Eventually I will not be alive because Valar Morghulis- all men must die," he said, talking about the subject recently.

The obvious question is what would happen to the series in the case of his demise. Martin has expressed that he would prefer his work be left alone. That said, he fully expects that eventually the land of Westeros would fall into money hungry hands. "One thing that history has shown us is eventually these literary rights pass to grandchildren or collateral descendents, or people who didn't actually know the writer and don't care about his wishes. It's just a cash cow to them."

He, in turn, expressed his admiration for the family of The Lord of the Rings author J.R.R Tolkien, which has guarded his writing quite closely. "Although I've never met the man, I admire Christopher Tolkien, his son, who has been the guardian of Tolkien's estate who has never allowed that," he said. "I'm sure there are publishers waiting in the wings with giant bags of money just waiting for someone to say 'yes, go ahead, let's write Sauron Strikes Back'." So, put shortly, if Martin were to pass away without finishing A Song of Fire and Ice, we might have to wait for some cash hungry relatives to come around to find out how it all ends. Then again, the HBO series would probably come up with some good too, so there is that. Even so, here's hoping it never comes to that and Martin himself is able to see his vision through.

Related to:
stew shearer, a song of ice and fire, game of thrones, george rr martin, movies and tv
0
Tweet