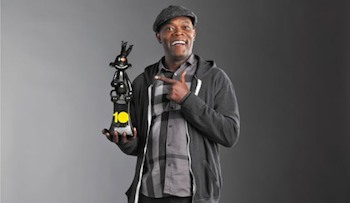 Out with the VGAs, in with VGX.

With game of the year season rapidly approaching, it's almost time for everyone favorite holiday tradition... The Spike TV Video Game Awards. Cue show organizer and GameTrailers TV host Geoff Keighley, who announced on Twitter last night that Spike was changing a few parts of the show, starting with its name.

The Spike TV Video Game Awards are now to be referred to as VGX. Whatever you prefer to call it, the show will be shown on Spike TV and stream across a wide array of digital platforms when it airs December 7 at 6pm Eastern.

It's unclear what Keighley is referring to when he mentions the show's "expanded digital footprint." He may be referring to the fact that the show will stream on a whole bunch of platforms and websites: According to the Spike website, the show will be viewable online through Xbox Live, PSN, Twitch, VGXLIVE.com, Hulu, Yahoo Screen, Spike.com, ComedyCentral.com MTV.com, MTV2.com, BET.com and GameTrailers.com. Then again, he could be talking about anything.

Keighley says details are coming soon, but in the meantime there's no clue as to what games may be nominated or who's hosting the show. For now, fans can vote for their most anticipated game of 2014.

Regardless of wins, we expect it will be a newsworthy affair as always: Like last night's PS4 launch show on Spike, the VGAs are often packed with high-profile trailers announcing new games and/or release dates. Let's just hope there's nothing as confusing as last year's Phantom Pain debacle.

The Big Picture: If the Oscars Were the VGAs MovieBob 230 Comments
Comments on