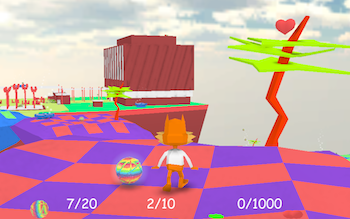 You just can't handle the 'tude.

Mascot platformers were the muck-grey shooters of the 90's. When publishers saw the piles of currency that Mario and Sonic regularly collected, the market was soon flooded with cartoon clones. No character better represented this paint-by-numbers marketing than Bubsy, a wacky cartoon cat who tried way too hard to be cool. What little goodwill Bubsy had was destroyed by Bubsy 3D, a game that makes regular appearances on "top 10 worst" lists. Now, an art collective has decided to resurrect the totally tubular feline just in time for his 18th birthday. Oh, and it's supposed to be educational, too.

Unfortunately for purists, the unity-based remake takes some liberties with the original. Fortunately for surrealists, those liberties have Bubsy take a trip to the James Turrell Retrospective exhibit at the Los Angeles County Museum of Art. It's sometime after that when things get weird. Honestly, you'll just have to experience it for yourself.

Very few characters made the transition to 3D gracefully. While Mario did things right, Bubsy did things definitely wrong. It wasn't just bad, it was an unnatural abomination whose unholy aura causes nausea or worse. Video footage of it has been known to cause possession by chaos gods. Thus, it's a great platform for the Arcane Kids, a game-based art collective that holds that "bad is more interesting than good."

Escapist Editorials: The Escapist's Most Anticipated Games of 2014 The Escapist Staff 48 Comments
Comments on