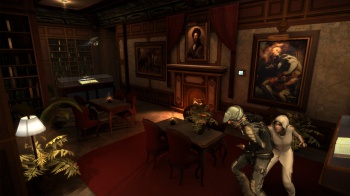 Director Ryan Payton says the previously stated summer release "was the most optimistic we could have put on our Kickstarter."

It's been a while since we had word on Republique, the dystopian stealth adventure from former Metal Gear Solid 4 producer and Halo 4 creative director Ryan Payton. His studio, Camouflaj, hasn't updated its website since the start of February, perhaps leading some to believe they had been whisked away by totalitarian forces similar to those featured in their game.

Recently, Payton has broken his silence in an interview with Red Bull UK. Camouflaj has been hard at work on the game and Payton aims to have Republique released by December. The game had originally been planned to be out this past summer, and in fact Camouflaj's website still lists "Summer 2013" as the release date. "I think our June 2013 release date was the most optimistic we could have put on our Kickstarter, and I think what we've realized is that one, it sucks for Kickstarter backers, as there's definitely a precedent for things taking longer," Payton said. Designer Paul Alexander commented as well, saying that "game development isn't an exact science ... things like delays, trying to get a game shipped on time, are a natural part of game development." Backers have been receiving regular updates on Republique's development via Kickstarter, Payton said, adding that the key is to make sure the community stays in the loop.

Republique, which drew in more than $555,000 from Kickstarter last year, garnered a lot of attention at the time of its announcement for its goal of bringing AAA-quality development to the iOS platform. In the Red Bull interview Payton talks about how he wanted "to do the first ever, best ever facial performance, character performance game available on iOS or mobile, before anyone else does it. And I definitely feel we're going to pull it off." A PC and Mac version of the game is also being developed.

Top 5 with Lisa Foiles: Top 5 Fake Endings - Just When You Think It's Over... Lisa Foiles 65 Comments